Riding Through The Rockies – Jasper To Canmore 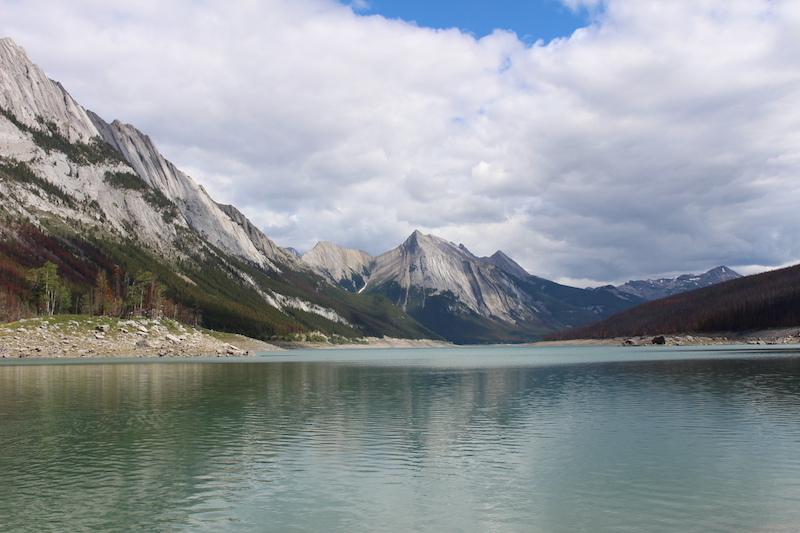 Jake’s mum Samantha has very kindly written a collection of guest posts which will cover our time together in Canada. Here’s the second in the series.

Back on the road, we headed into the Rockies, a long and initially boring drive, punctuated by a spontaneous swim – a serendip! – in Clearwater lake.  We stayed overnight in a Best Western (lovely indoor pool, terrifying flume) at Valemount, counting the waggons on a mile-long freight train as we waited to cross the tracks. 89 in total! 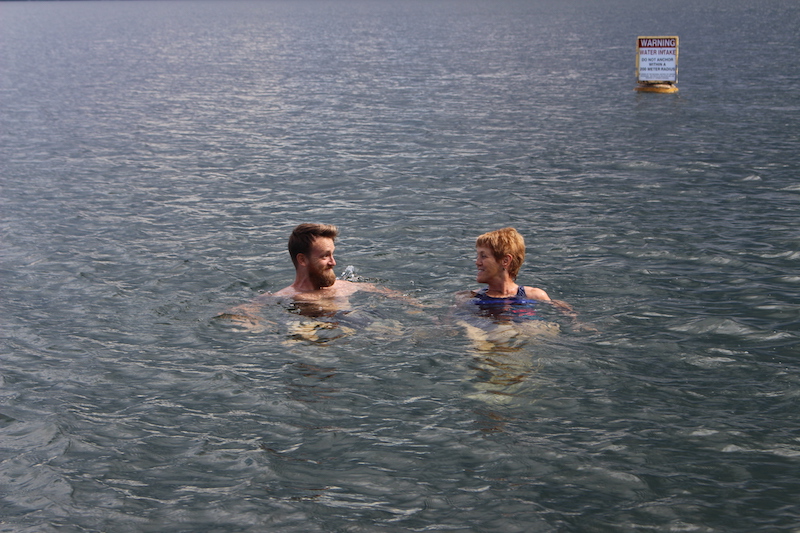 En route to Jasper and we decided to stop off at Mount Robson (12,972 ft) the highest peak in the Canadian Rockies for a 6-mile hike. With no bear spray or bell on our persons and keen to avoid coming face to face with a bear, we sang, spoke and whistled our way to Kinney Lake where we rewarded our efforts with a tracker bar and a celebration chocolate. 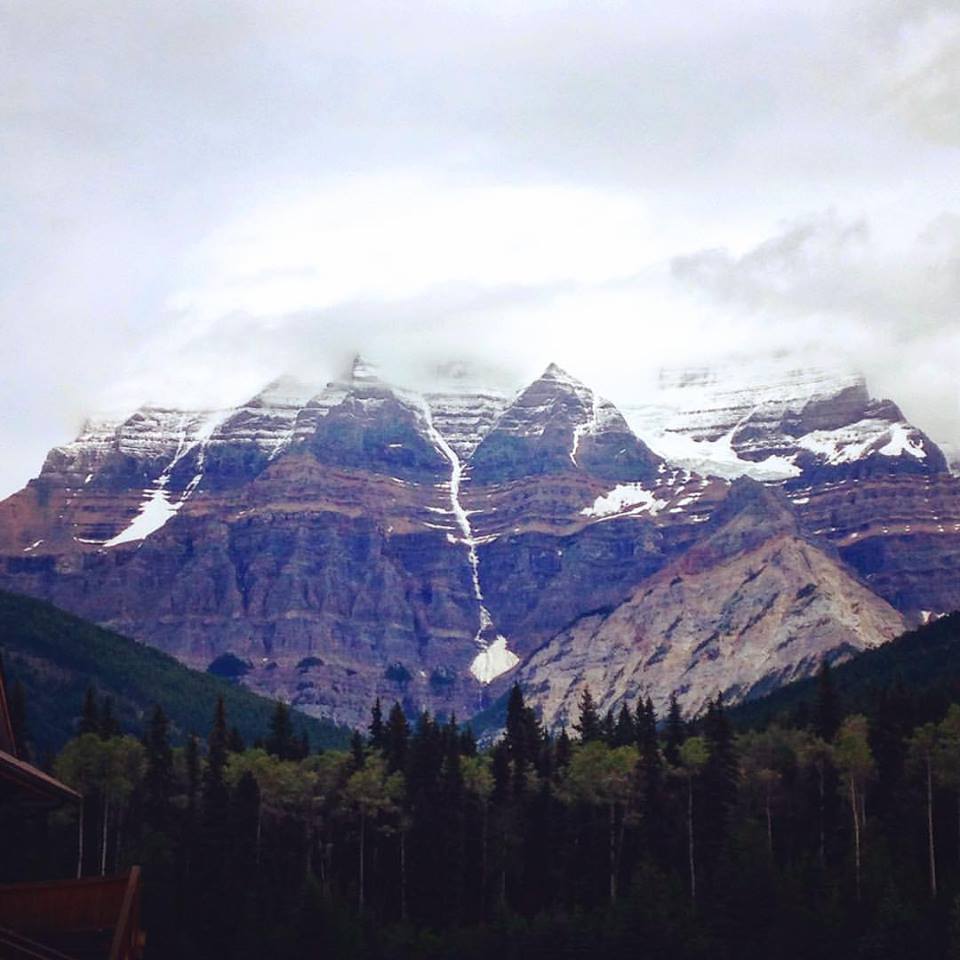 Driving out of the park and toward Jasper we were aghast when a black figure slowly crept onto the highway. Quickly realising what it was we pulled into the side of the road as it turned around and made its way back into the verge it had crept from. Relieved to have seen the bear from the comfort of our car rather than during our hike. 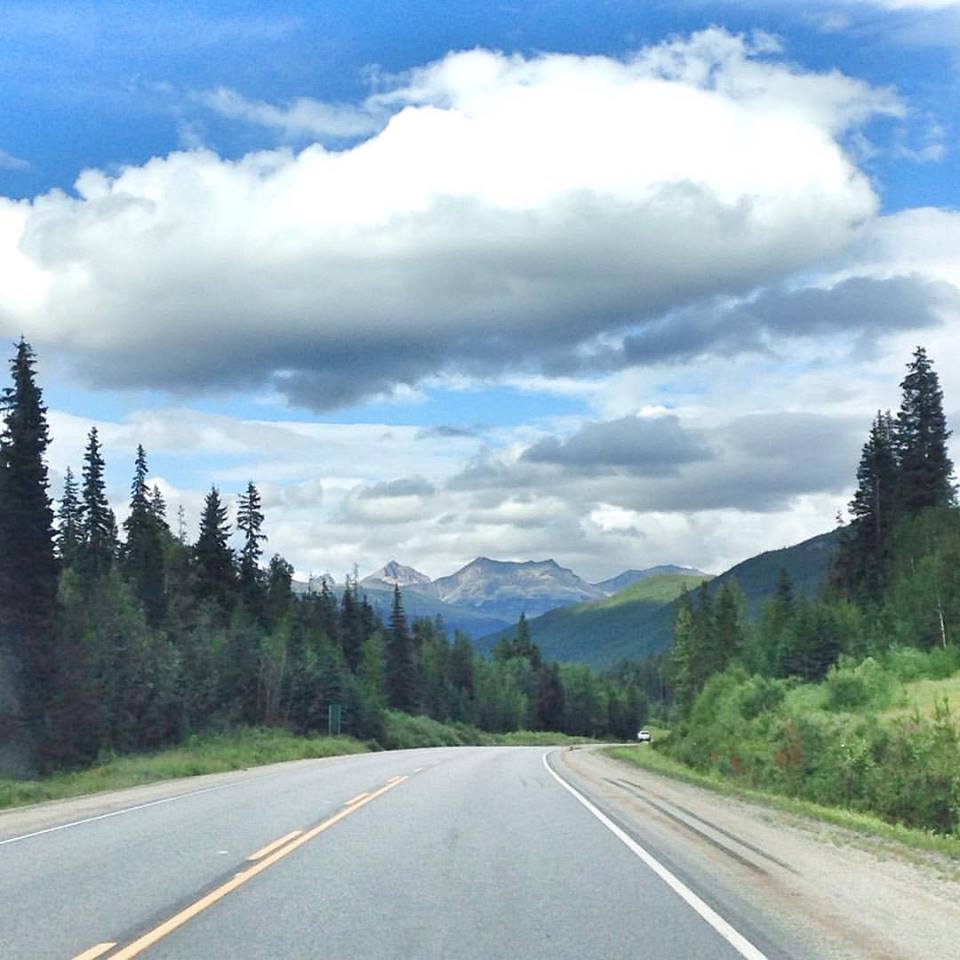 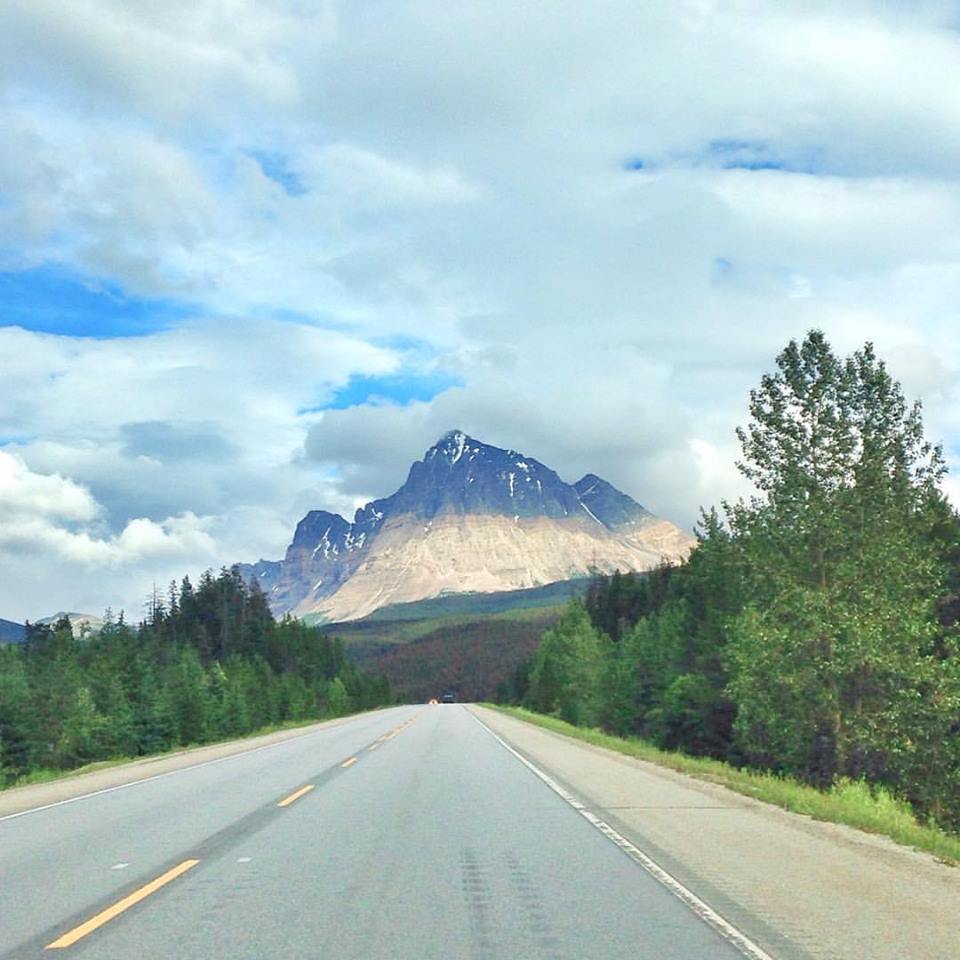 On to Jasper, where we stayed in anachronistic Athabasca Hotel, named after a nearby waterfall….a strange hotel where the staff seemed to have little idea how to provide a normal type of service,  and we were impressed by the range of foul language and repeated expletives from two girls in the bar.  Here we did some hiking to wonderful lakes (Medicine Lake) and falls, and the dramatic and narrow Maligne Canyon,and we spotted elk, deer and bear….but no elusive moose. 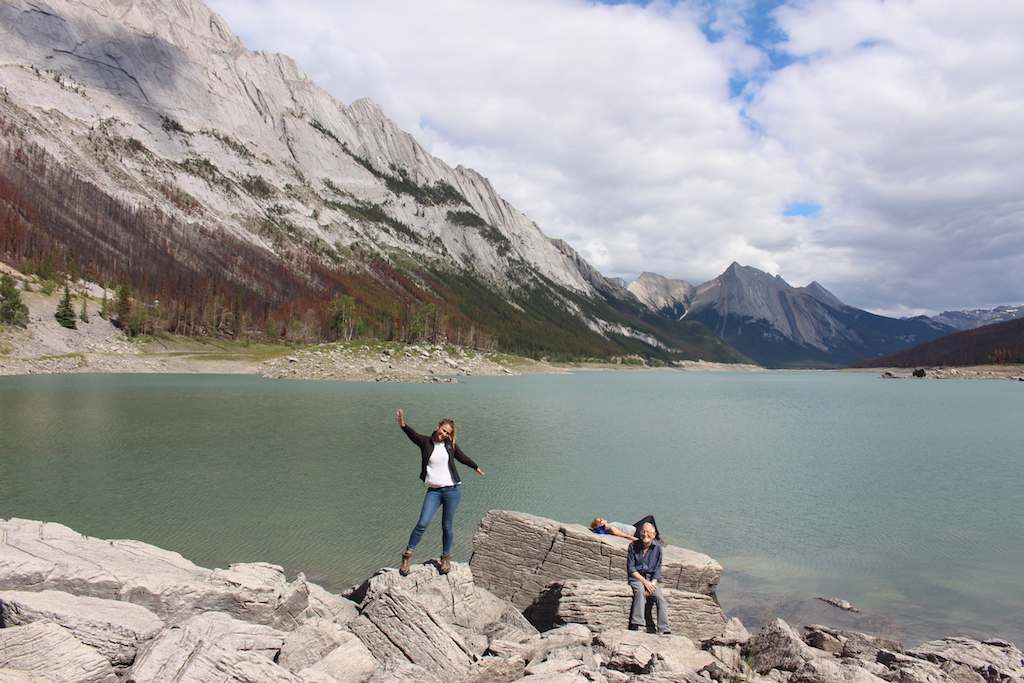 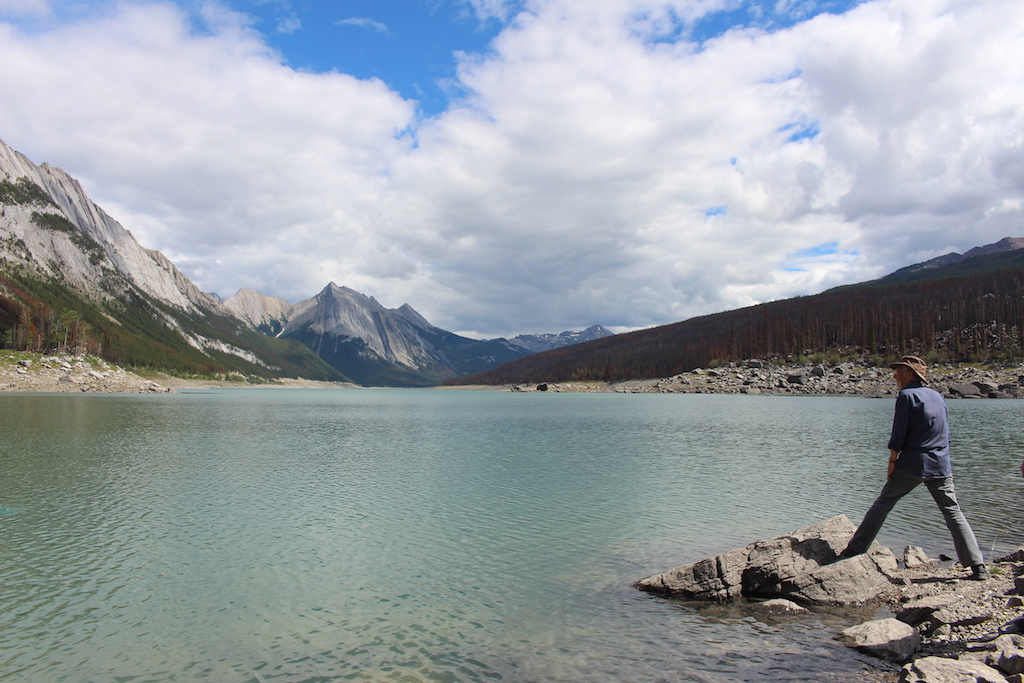 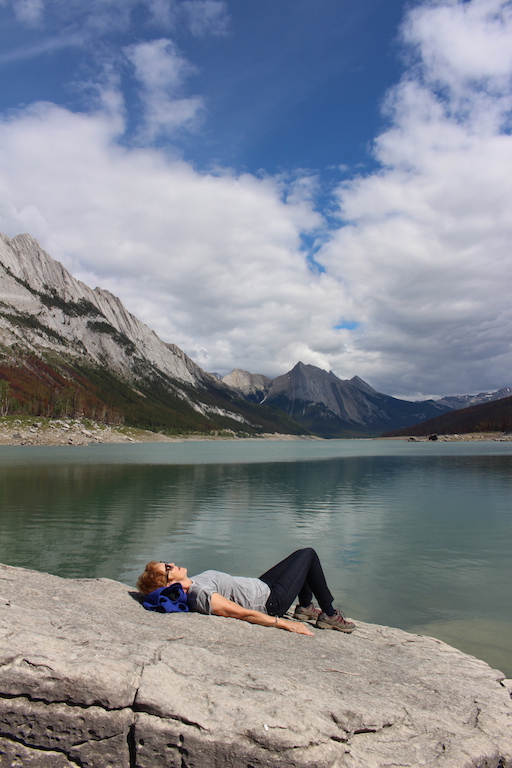 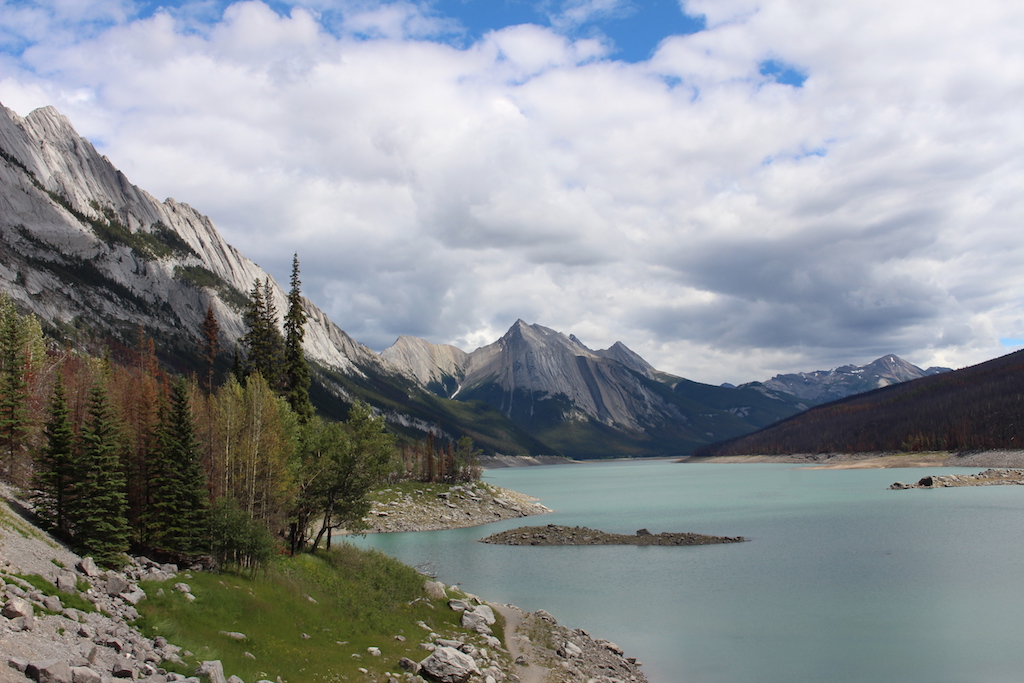 Dramatic Athabasca Falls, one of Canada’s highest, was memorable not only for the dramatic cascade, but also for the car park loos – the smell was so overwhelming one of our party threw up! 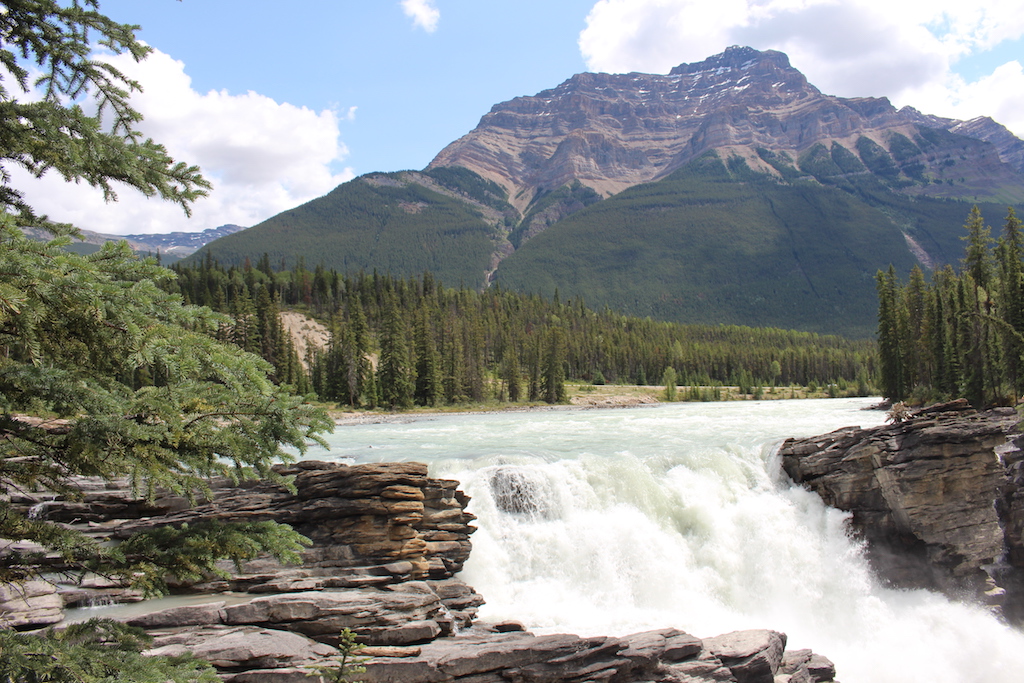 After this came the Columbian Icefield Parkway, a long drive south through indescribably beautiful and dramatic scenery, where we walked to two separate glaciers just off the highway. 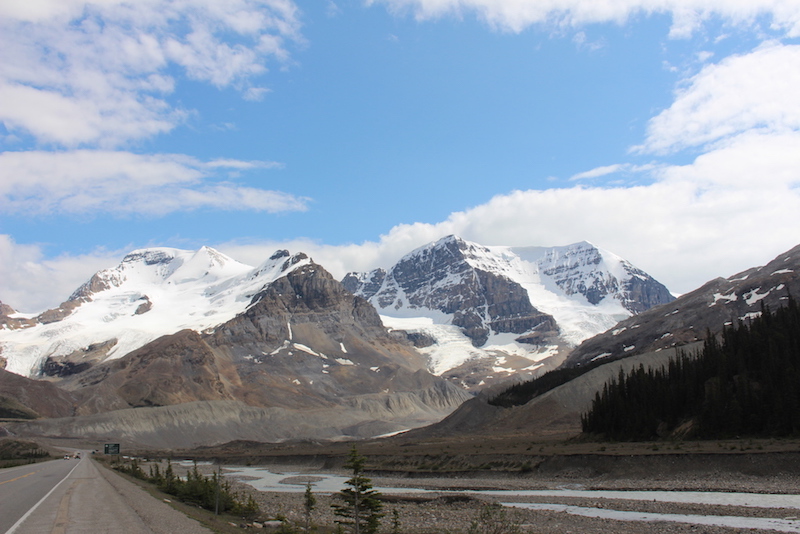 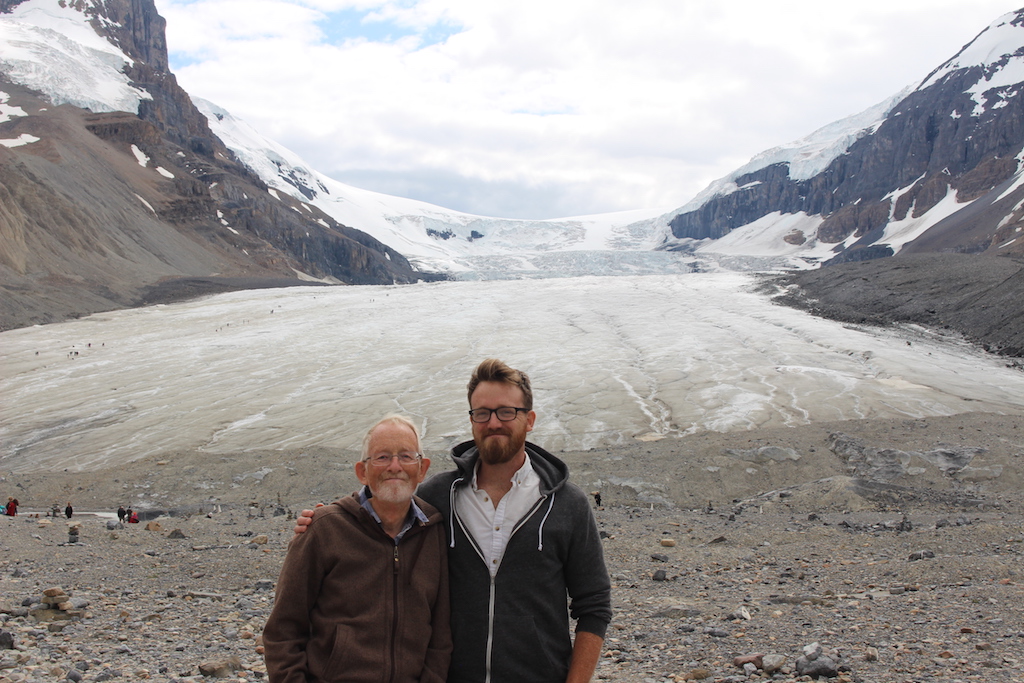 During this drive, we made one of those frustrating mistakes which can really mar a trip: one of us left two mobiles on the roof of the car before we drove off.  Alerted by a bang, after a half hour search, one was found in bushes beside the road, (ruined) and the other 100 metres further along, undamaged except for its camera.

One of the most striking characteristics of the Rockies and National Parks, is the pristine and unspoilt emptiness, great tracts of forests, lakes and mountains with no development, no buildings, no fields,  no power lines, and no litter whatsoever. 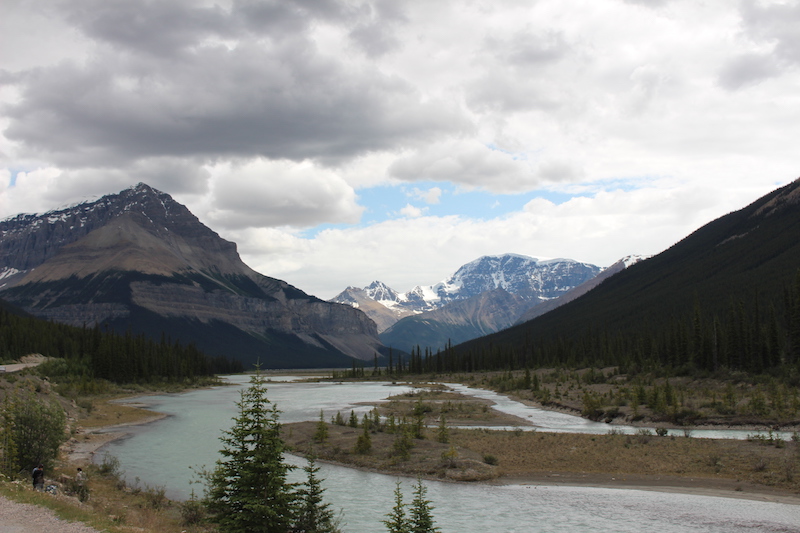 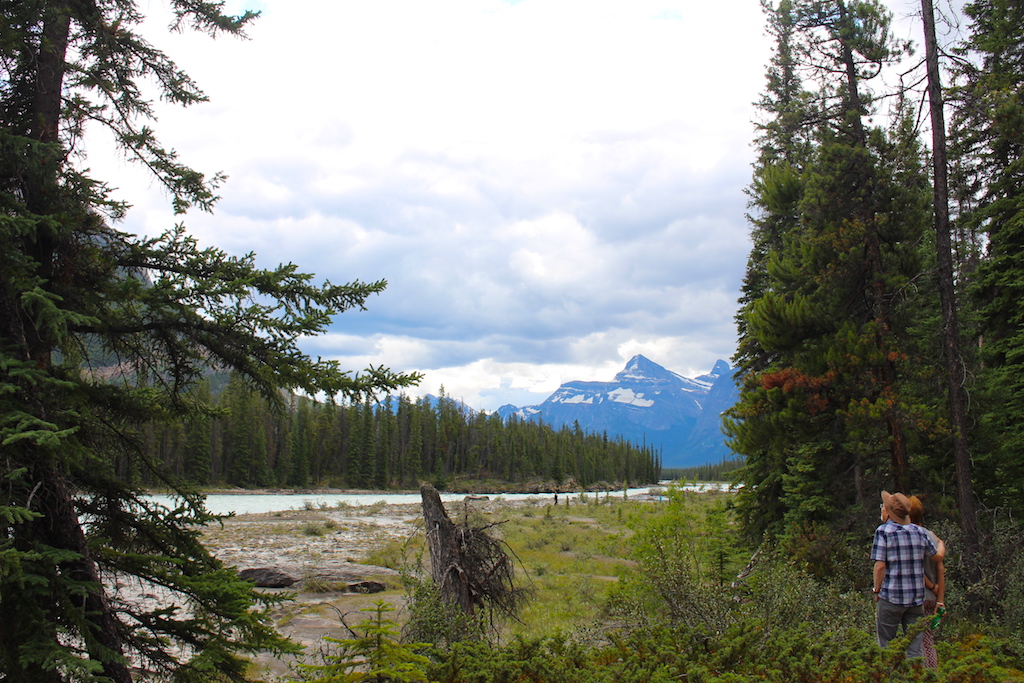 A poor value bistro meal was a highlight of inappropriately named Golden night followed by a night in a log cabin outside the town and then a hike around the Emerald Lake, and yes it’s really that colour, due to  “rock flour”, minute particles of stone within in. 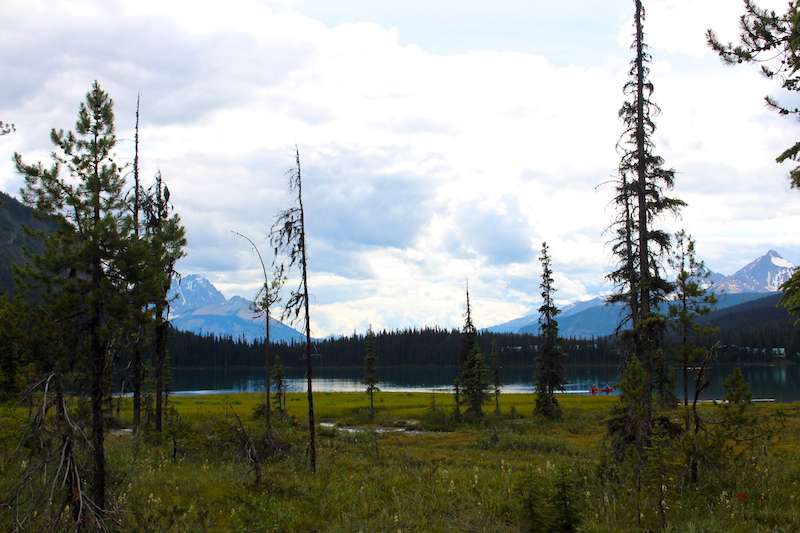 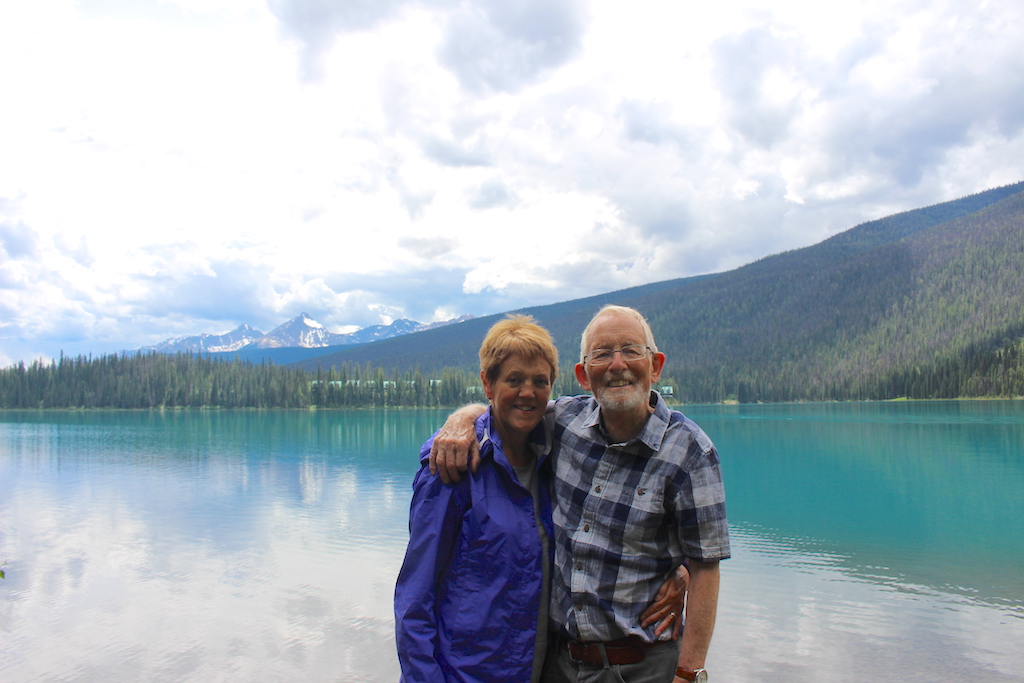 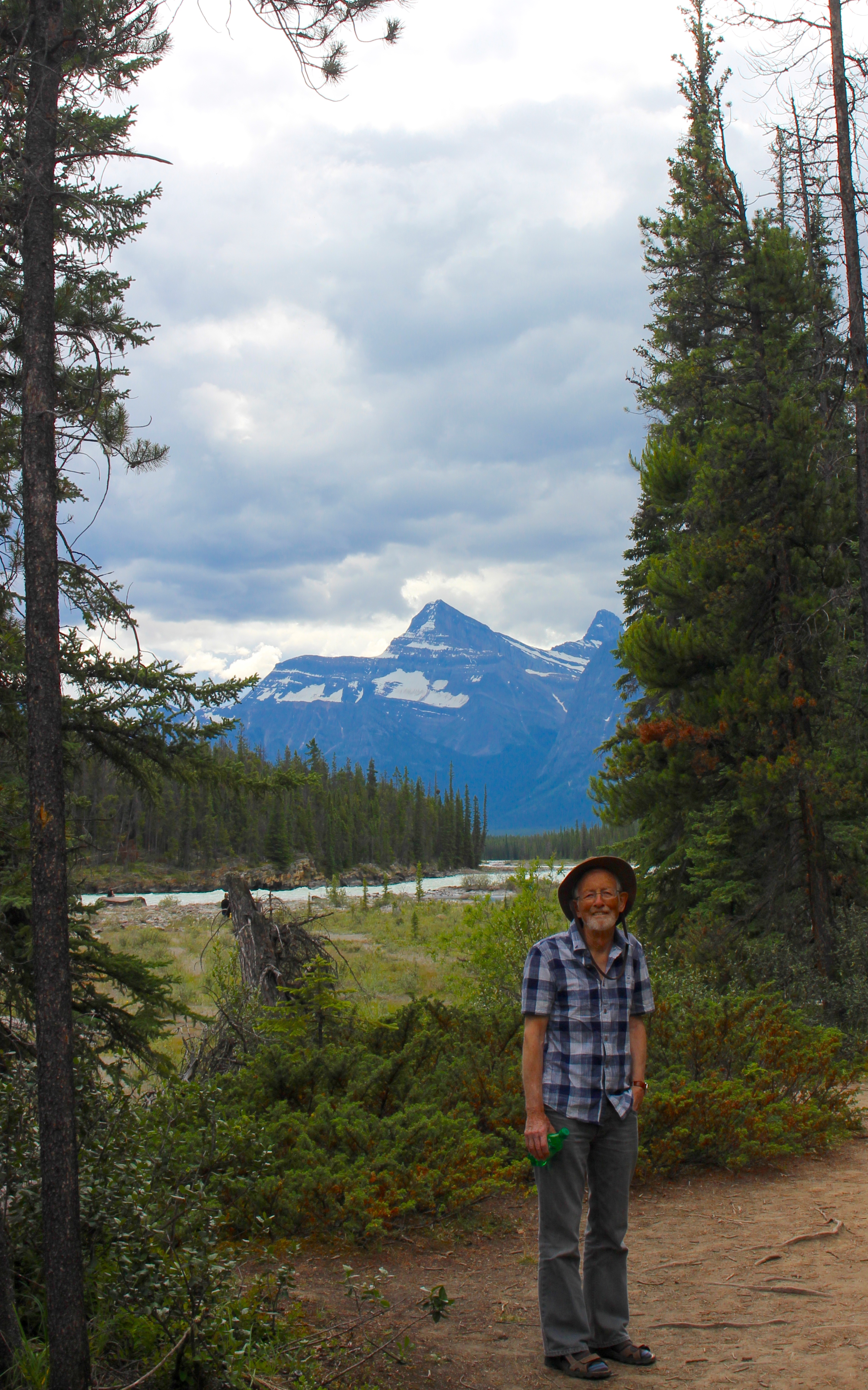 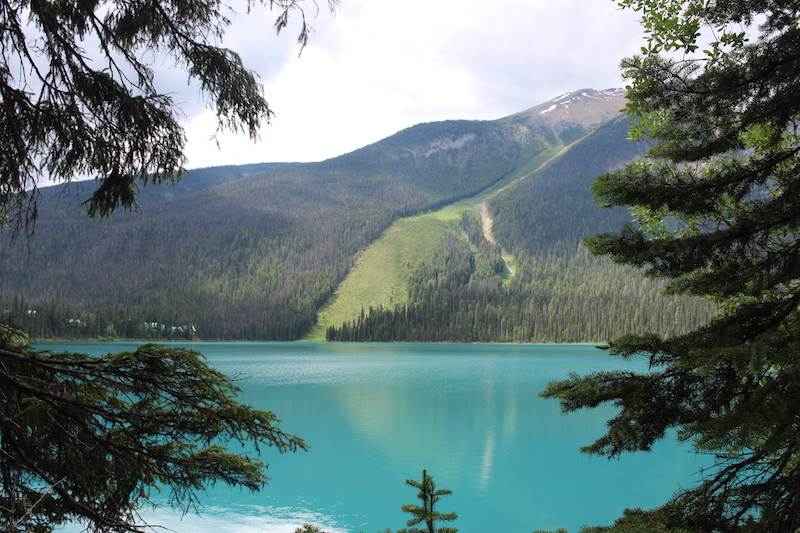 On to Canmore for a relaxing day in beautiful surroundings, staying two nights at the Georgetown Inn, superb comfortable rooms with jacuzzi baths.  We spent the day visiting a brewery and a range of galleries in the Main Street, followed by a swim in the impressive leisure centre, Elevation Place, which included a library and extensive climbing walls.  I was moved to see “ReDress”, a photography exhibition of red dresses, designed to draw attention to the disappearance of over a thousand indigenous First Nation women, missing, murdered?

We were extremely impressed with our meal at Crazyweed kitchen, where we sampled locally grown ingredients including cheese and wine and an incredible Chocolate Budino, a ridiculously chocolaty and salted caramel concoction that filled us with enough sugar for the rest of our trip.

Samantha, Jake's mum, joined the Inca to Inuit adventure in June 2016 for the Canadian leg of Jake and Lyndsay's adventure from Peru to Alaska 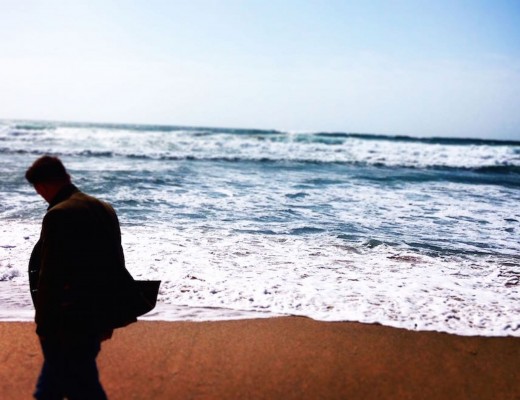 Uncoiling On The Cornish Coast – Our Cornish Break 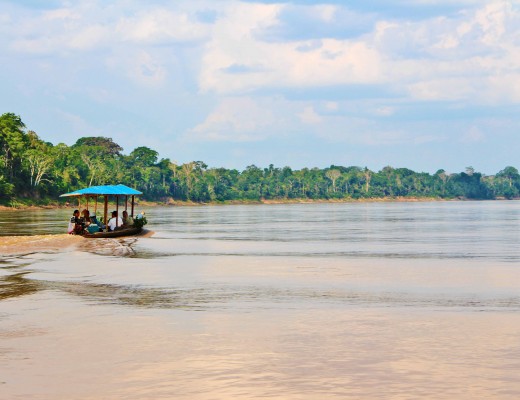 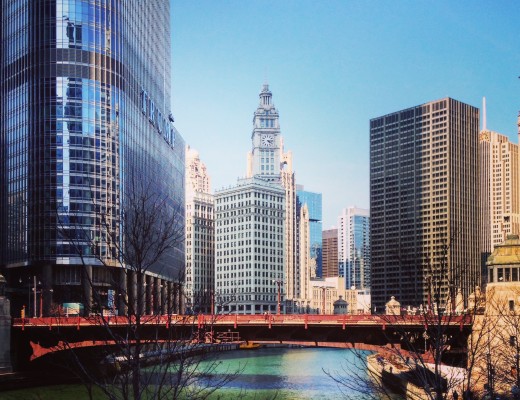 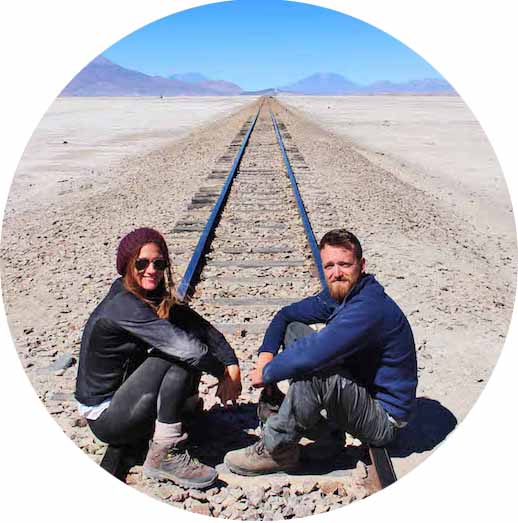 Hi there, welcome to Inca to Inuit. We created Inca to Inuit to document our adventures as we travel from Peru to Alaska over the course of a year. We hope you enjoy the journey as much as we do.